A kōan: If the world were other than it is, how would you know? 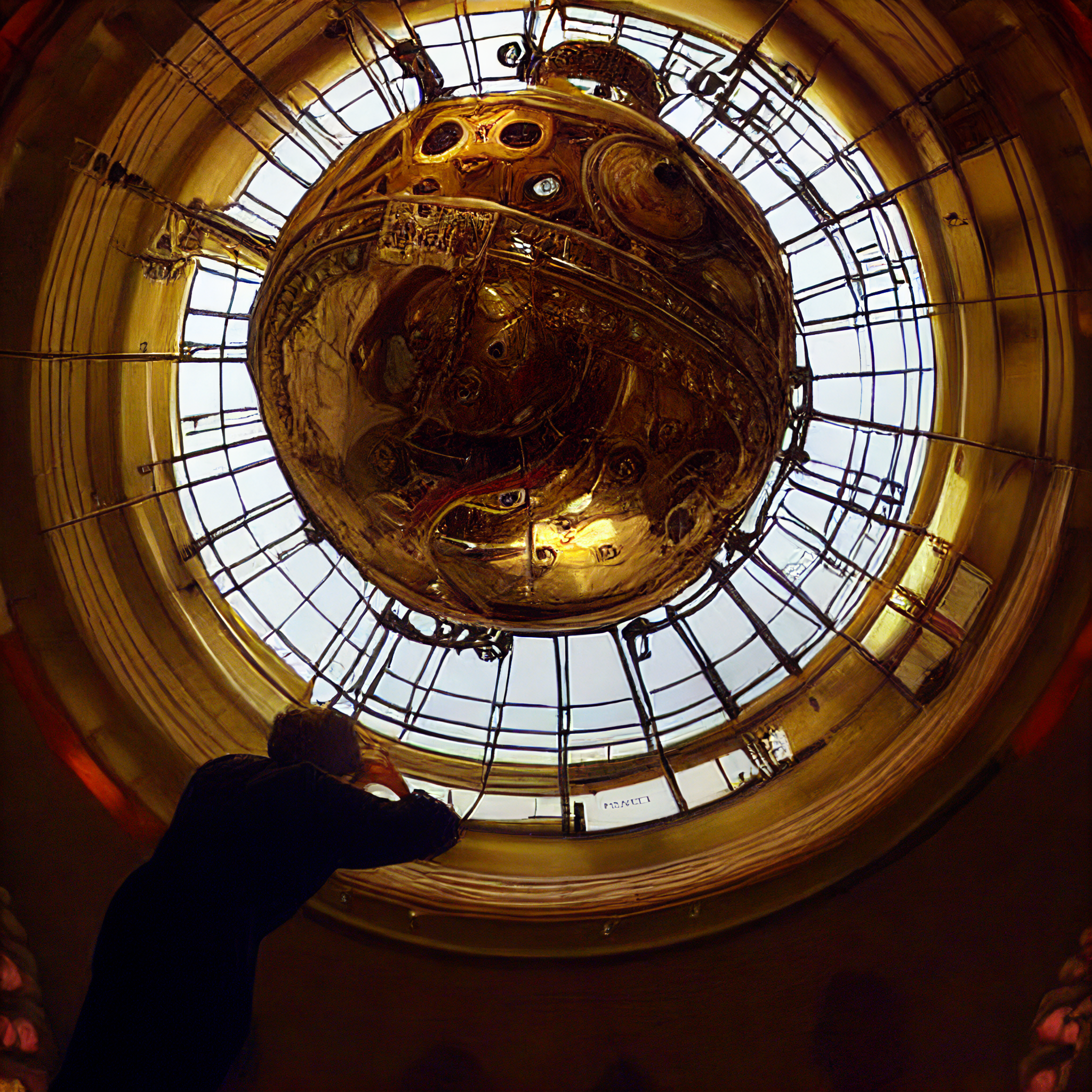 In The Discarded Image, C. S. Lewis in full scholastic mode invites us to imagine the world as the medievals saw it: as gravity itself, the most solid and stable thing there was. “You must go out on a starry night and walk about for half an hour trying to see the sky in terms of the old cosmology. Remember that you now have an absolute Up and Down.” Elements order themselves along a rarefied gradient from outer fire to innermost earth. “Beyond” the fixed sphere of the stars is the intellectual light of God: There is no agoraphobia like that which modern man feels before the pathless void. Earth is heavy sediment, the house of heaviness and Hell in Dante’s telling, the stone at the bottom of the uttermost well.

To this medieval Weltanschauung Copernicus, Galileo, and others came with radical new ideas and rang the bell until it cracked. Their vertiginous upending of the physical world sent shocks reverberating throughout the spiritual and intellectual world for centuries. Decades later the English bawd and divine John Donne penned a bitter meeting in Hell to commemorate this inversion of value. In the story, Copernicus pleads before the gates of Hell that Lucifer owes him ingress. “I am he, which pitying thee who wert thrust into the Center of the world, raised both thee, and thy prison, the Earth, up into the Heavens. . . .The Sun, which was an officious spy, and a betrayer of faults, and so thine enemy, I have appointed to go into the lowest part of the world.”

Not so long ago, Newtonian absolute space was likewise unmoored and rendered relative, while matter’s innermost atoms were found to obey very different rules than those of continuum space. Trauma from our universe thus slipping the docklines was sublimated into New Age quantum woo, nuclear X-risk fearmongering, fundamentalist denial, technocratic worship, and environmentalist pessimism. We redirected the disorientation of that parallax shift into science fiction’s ignited imagination to go forth and conquer the immensurate stars, before political realities doused the efforts and mired us in stagflation and culture wars.

Fittingly, then, David Bentley Hart’s Gnostic alternate-universe phantasmagoria Kenogaia opens with a heresy just like Galileo’s: a telescope trained on the heavens, ferreting out subtleties to upset and overthrow the god of that world. Our hero Michael Ambrosius lives at the edge of a society as dogmatically mechanical as the crystal heavens—but of course all is not as it seems, and deep revolution looms for the good people of Kenogaia (“empty world”). The powers of that world know, however, that any changes in the mechanism of the heavens bodes a world-ending apocalypse (literally “unveiling”); having from century to century needed to stamp out percipient heretics who cracked the illusion, a formidable institutional architecture has been built to isolate and reprogram different-believers. As the mysterious child Oriens arrives from beyond the bounds of the world, the powers that be swing to work, and in good novel fashion fail to grasp every grain of sand, setting up the series of fatal encounters that bring the protagonists and an extra-worldly visitor to the heart of Kenogaia and thence its crisis.

Gnosticism describes a family of now-extinct early Christian and para-Christian traditions that largely hold two teachings in common: that the elect are saved through knowledge (gnosis), likely secret teachings passed by word-of-mouth from the disciples of Jesus; and that this material world is altogether wicked, created like sea-foam from the rupture of divine warfare (and thus the Creator, the Demiurge, is in fact evil). Hart’s novel takes its inspiration from “The Hymn of the Pearl,” A Syriac poem from the Acts of Thomas, a Gnostic text written in the 3rd Century AD. The “Pearl” describes a quest to retrieve a stolen pearl at great personal hazard, allegorically presenting the gnostic structure of human life as veiled in forgetting of higher realms from which we wandered. Hart meets the “Pearl” on its own terms—even as it serves as a framing quote for each section of the book, this does little to telegraph the action.

Like Dante, Hart paints a compelling worldview, and populates it with characters, institutions and movements which render it realistic and piquant. Worldbuilding as a narrative framing device puts an author in danger of getting weighed down under too much exposition; remapping or rebranding this-worldly institutions can help orient the reader by analogy. Kenogaia employs the expedient of having a parent Noble Tongue (Latin-derived) and Virtuous Tongue (Greek-derived) to motivate a rich library of recoinages without thereby requiring too much memorization for the reader. The “empty world” is filled with its own early-modern European history: the Lupine Brethren as enforcers; a capsule history of locally relevant heresies; something of a security-state Inquisition and an exile for disgraced intellectuals. Hart’s minor characters are frequently Shakespearean, in shades of Dogberry and Polonius. The powers of darkness harrow and haunt, while scenes of divinity near the end deliver on a vision of Paradise—no mean feat. Perhaps the most enduring quirk of the book is the author’s peculiar fixation on color: We come to know the rich jewel tones of every sphere and cloth and eye.

“I went down into Egypt, / and my companions parted from me.” So goes the protagonist of “Pearl” into a lonesome and dreary world much like our own, which has undergone its own Fall of a sort; so goes the itinerant prince of heaven Oriens into this particular cosmos. One wonders how much Hart’s themes of a security-state panopticon, a materialist universe, and a perpetually forgetful humanity drew upon the global experiences of recent years. As the “Pearl” recites, “I forgot that I was a son of kings, / and I served their king.” Gnosticism like Platonism leans heavily on metempsychosis to explain knowledge and selfhood in the world; any account relying on the transmigration of souls must deal with our manifest forgetfulness, whether unchosen (as for us and the inhabitants of Kenogaia) or elected (the said son of kings).

David Bentley Hart is a contemporary Christian theologian of the first water. Although primarily known as a rebarbative essayist (cf. “Christ and Nothing”; “The Illusionist”; “The Laughter of the Philosophers”—would that I had written the line, “a ghastly, feeble, and imbecile squib by one of the twentieth century’s most indefatigably fraudulent intellectuals, Isaiah Berlin”)—Hart’s prolific pen has yielded fiction before, notably a gnomic short story collection The Devil and Pierre Gernet. He adopts—and in Kenogaia bears off—a perennial but doctrinally unpopular apologia of universal salvation, that every atom of Creation is ultimately a penny worth a God stooping over to pick up. He affects a highly symbolical interpretation of Biblical texts, cultivating an attentiveness that spawned the imaginative elaboration of the world of Kenogaia from the evocative spareness of the “Pearl.” As with much of his other work, Kenogaia has fueled a simmering speculative discussion across the blogosphere of what Hart actually believes with respect to the nature of our world.

Because he is both a fantasist and a Christian, Hart can hardly avoid comparison with the father of children’s apologetic literature, C. S. Lewis. Kenogaia bears itself off well in this regard: By immersing itself entirely in the metaphysical framework of a particular strand of Gnostic thought, Hart can avoid now-tired allegories and moralizing sermons which by and large age poorly in Lewis. Kenogaia argues that evil must be chosen. It does not suffice to impose it. The active choice of an agent, even under deception, must take place. The Devil is the hardest-working man in Creation, planting whatever it takes to make us take those fatal missteps of our own free will and choice. It is key for evil that we must collude in our own oppression and self-deception. The protagonists of Kenogaia attempt the same sort of hunkered-down evasion that fails the antagonist, in reverse. Only a direct frontal assault of divinity can overwhelm that world’s Māyā, its sense-bearing clothing that nevertheless obscures.

Kenogaia expresses sharp criticism of many of the deeds of human institutions, including organized religion, psychology, law enforcement, and history. Most particularly, the powers that be in Kenogaia fail to honor human agency and investigation: “the old books were destroyed for the most part. . . . [I]t became illegal to teach and read those sorts of stories, or any of the older philosophies either.” The protagonists are relatively unchurched except for required catechism, and perhaps in their relative innocence they are able to more clearly perceive the task charged to them.

The offenses of the Gnostic demiurge and his false religion are yet present in our universe and our putatively true religions. “I have heard even the cruelest of teachings described as counsels of mercy or goodness or justice.” Hart’s ample body of work, in particular the unorthodox apologetic That All Shall Be Saved, engage these, but vexing questions of obedience and engagement and soteriology in a more fitly framed world are raised and then neglected by Kenogaia—perhaps intentionally for the reader to muse thereon. (The Grand Inquisitor has entered the chat.) Kenogaia serves as a two-edged sword, cutting into religion as we have it on the one hand, while not denying the truth of some kind of religiō on the other. “‘What is orthodoxy?’ . . . ‘Correct belief.’ . . . ‘The word I understood. What I do not know is what it signifies in this world.’”

To recapitulate: If the world were one way or another, how would you know? If you were under a veil of forgetting, is there a true name that could draw you forth? We would term such an investigation as scientific, in a sense: an attempt to draw a map of reality and save the appearances. We dream—we hold within our selves secret wishes to create and better the whole bizarre pageant of human history. Yet we are always stymied in our efforts. Some of us feel ourselves to be strangers and sojourners in this world, while others gladly embrace human consciousness as a manifestation of the Universe waking up to itself. But together we hope there is some participation, that what we work in this world echoes or rhymes with a higher sphere—platonic, theological, formal-materialist, or existential scream into the void. Our quanta of action are containers for meaning, and we hope that meaning will run over from them, and we hope that such supervenience can be held in what we may as well call the kingdom of heaven. “And the heaven departed as a scroll when it is rolled together; and every mountain and island were moved out of their places” (Revelation 6:14). Kenogaia invites us to imagine that scroll rolling up, and what lies behind the phenomenal world.